How do we solve a complex problem, like global poverty? Or the climate crisis? They are challenges so broad and complicated that we would not even know where to start. What if, by trying to solve one of them, like hunger for example, we caused an even bigger problem in the environment? Addressing this type of conflict from a single angle, without taking into account all the elements to which they are connected and which they can affect, is a task generally doomed to failure.

These are what are known as “wicked problems“, issues in which many contradictory or changing aspects are involved, difficult to recognize, and that overall make it impossible to solve them. Many of these twisted problems are social and political in nature, due to the complexity of these systems. Natural disasters, the health system or economic crises are other examples. But… what can we do with them then? How can we take into account all the repercussions of possible actions?

At CREDA, within the framework of our Blue Bio Med project, we have tested a policy experiment methodology to achieve just this: collect all the perspectives of a problem, and study how a single action is integrated into a complex system of related factors.

Our study case has been the problem of plastic pollution in the Mediterranean, a situation that differentially affects multiple social actors, from companies to the general population.

The method we use, which we have implemented jointly with the consultancy Reimagined Futures and the area of economic promotion of the Generalitat, is known as system mapping, and it consists of three stages.

First, we collect information about the issue at hand. Through conversations with experts and bibliographic searches, we build a map with the basic axes in relation to the challenge we want to solve. For example, for the plastic pollution issue, we include aspects such as citizen awareness, waste management, current regulations… In this same process, we identify the key agents that we need to solve the problem. For the problem of plastics, our agents were: companies, research centres and universities, public administration and civil society.

From this point, we bring these agents together to review and improve the map by adding other determining factors and components that must be taken into account to face the challenge (Image 1). In our case, this was achieved by holding two workshops in which we invited expert representatives from the four identified groups, with a total of 11 participating organizations in the first event and 32 in the second. The added topics delved into the problem (for example, single-use plastics, their price, or the relationship with fishing practices), also including the axes that interconnected them with other components in a facilitating or blocking way. For example, pollution negatively affects the well-being of the maritime ecosystem, which in turn is related to the productivity of fishermen, and therefore to local economic growth and regulatory policies.

Thanks to the work carried out during these workshops, it was possible to draw up a map that collects the entire system of technologies, policies, business strategies, social norms and cultural practices around the problem of plastic pollution in the Mediterranean, and how their relationships contribute to facilitate or block the resolution of the challenge. With this map, a third workshop was organized, where the participants identified the leverage points, that is, the areas where certain actions could be carried out and have the greatest possible benefit (Image 2). These were:

Image 2: Leverage point, participation of social actors in the co-creation of public policies 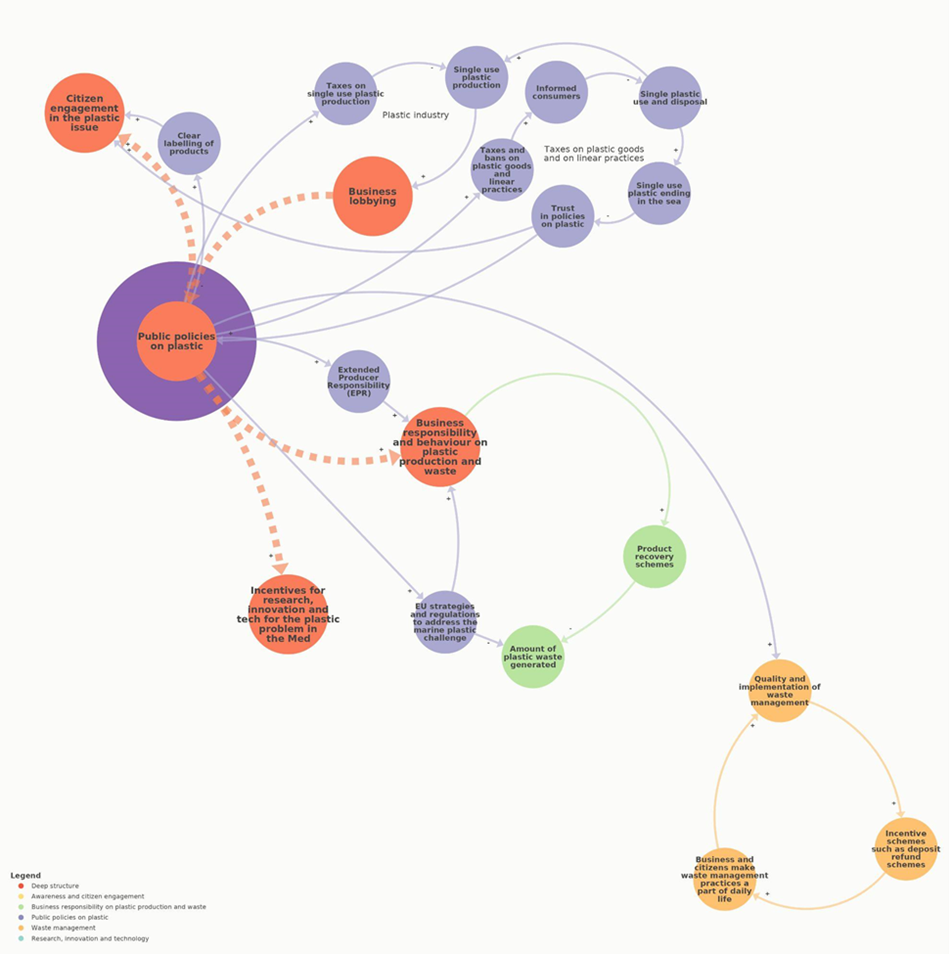 And with these points as a guide, the 29 organizations that contributed to this last workshop proposed concrete actions that they could carry out, exploring all the dimensions necessary to implement them: activities, resources and key actors, sources of financing, potential obstacles, impact indicators, among others.

The systems mapping methodology was successful in the plastics challenge posed. The map creates a shared vision among all the agents involved in which the components affected by each action can be easily seen, along with the ways in which they are affected.

In addition, the proposals collected during the workshops will not remain only on paper. While the map for the plastics challenge was being built, the Innovation Alliance for the Blue Bioeconomy was created within the framework of Blue Bio Med. This organization will help bring the result of this experiment to reality and will keep in touch with the organizations involved in the process.

The challenge of plastic pollution in the Mediterranean is just one of the four axes on which we will work within Blue Bio Med. There are still three other experiments, also developed in the Mediterranean area, with different challenges to face in relation to circular aquaculture, invasive species and the digitization of the blue bioeconomy. Our final goal is to study different methodologies that allow us to face — in a useful and multidisciplinary way —these wicked problems posed by sustainable development.

The development and implementation of the public policy experiment methodology would not have been possible without the support of ART-ER (leader of the Blue Bio Med project), of the Generalitat (General Directorate of Maritime Policy and Sustainable Fisheries, Waste Agency of Catalonia, associated partner of the project; Economic Promotion Area, PANORAMED WP 10), and Bluenetcat, Xarxa Marítima de Catalunya.